The traffic expert (Chuck Henson) check-ins and shares some information now on a similar lighting project coming soon to another bay area commute. It is tonight’s “Getting There” report.

“What’s really cool about all of it is, it can all be operated by here (points to a cell phone). So it’s all web-based or cloud-based what can be operated remotely from a phone, this taking,” says Sue Chrzan, THEA.

At the soon to be launched, decorative lighting on the Selman extension over Gandy Boulevard in Tampa, Rosanna Davis, general manager of DOMA home furnishings on Gandy, says it’s (the lighting aesthetics) are the icing on what was already a beautiful design. ” I think, with  landscaping and with the blue on each of the pillars, it really turned out exactly how they said it was going to.”

This is not exactly how it will look. For example, there won’t be any rapidly changing lights. Like we see on the Skyway, nothing that could distract drivers, but they are programmable.

“Our hope was to make this a signature bridge so that when we win the Superbowl again this year and the blimp flies over… that they will not only get the Skyway, but they will get the beautiful Gandy Boulevard. So that was our intention,” added Chrzan.

The extension project took more than two years to complete. “I don’t really believe that the construction really had an impact on that part of our business, people were coming in, and they were asking about it and they were certainly expecting us to say that it was had, a negative effect, but we didn’t feel it,” says Davis.

That’s all, certainly in the past and soon, a new layer of beautification will shine on above  Gandy. “I’m hoping that we will be done by mid to late October for the holidays,” says Chrzan.

Making, getting there on Getty even more beautiful in Tampa. 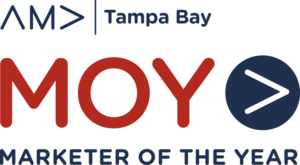